It was 31degrees in brilliant sunshine when Bay of Plenty Branch kicked-off its AGM and BBQ at the clubrooms of the Tauranga Gliding Club at 6.00pm on 31st January. The Branch has continued the practice of using this venue since the Branch was setup in 2015. The elevated clubrooms are located on the north-western edge of the Tauranga Airport has commanding views of both grassed areas vectors and the western end of the main runway. The recent hot summer weather has dried off the normally lush green grass.

The AGM was delayed with a queue to renew membership subs to Treasurer, Mike Feisst, where payment ‘on the night’ meant free admission to the BBQ to follow. Including partners, almost 30 attended the event -more than half our Branch membership. Among those paying up was Paul Fahey, well-known motorsport celebrity who recently moved to the area, who signed up as a new Branch member. The chairman, Des Underwood MRAeS, planned a prompt AGM with the necessary documents having been distributed by email ahead of the meeting. This allowed the formalities to be completed in just 7 minutes. Among the documents, the Chairman’s Report noted Branch membership had exceeded 50 members for the first time. 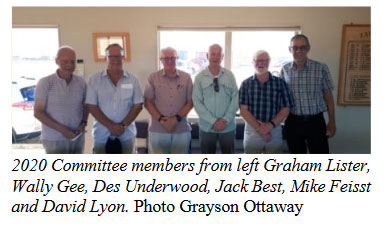 Financially, the Branch accounts showed both profit and accumulated funds being the highest recorded to date. The former Branch committee was re-elected, with Dr David Lyon (former Vice-Chair) re-joining the committee after almost three years in Melbourne, where he was a lecturer at RMIT. David has offered to be involved in the Branch plans for the NZ Division ‘Youth in Aviation’ initiative.

Then, it was onto the social side of the evening event with a BBQ and time for a catchup over a few cold drinks. As we had done in past years, committee members Wally Gee and Mike Feisst had pre-cooked the hot food ahead of the AGM which meant the food was quickly available. Our two most senior members present, Bryan Cox aged 95 and Stewart Boys 83, were invited to lead the BBQ fare of hot food, salads and nibbles followed by cheese cake, cream puffs, grapes and pineapple. Again, the well-appointed clubrooms, proved to be a popular venue for the meeting which concluded around 8.00pm with all those attending reporting how much they enjoyed the event. With a number of the committee members away in February, the Bay of Plenty Branch will start its monthly meeting program at the Classic Flyers aviation museum on Friday 6 March.