Journey into Space’ was a series of three lectures on the history of space travel Hugh started in 2010.

The third lecture back in 2012 looked at ‘everything else’; the major players, the launchers they are using, the orbits that are using and what the satellites and probes are doing.

This lecture is a 2020 update of the third lecture. It includes significant activities that have occurred since 2011, including the entry of New Zealand into the space launch business. 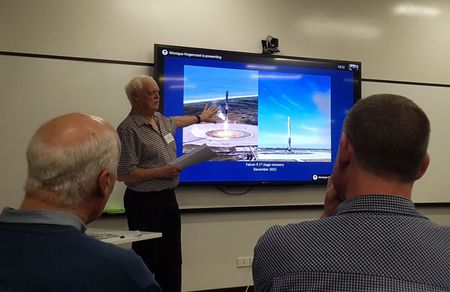 Hugh began his presentation with a brief recap of his two previous presentations to the Branch, in which he had covered the early years of space flight through to the Apollo moon missions. He then launched into a run down of how the space industry has been changing, along with supporting statistics.

While Russia was responsible for 61% of the 5250 (including 4799 successful) space launches between 1957 -- 2012, there are now 12 countries launching, reducing Russia's dominance. China currently has the highest number of launches, with New Zealand potentially becoming a significant launcher. The launch rates for most rocket types have been fairly constant in recent years, with only SpaceX and China's Long March standing out for increasing launch frequencies.

Hugh then gave an overview of the families of launch vehicles used by Russia, the ESA, Japan, China, India, and the USA, noting that China has achieved the first soft landing on the moon since 1976 end of the Apollo era. Atlas rockets, as used for the Project Mercury orbital flights, still feature among those used by the USA, however the modern Atlas looks nothing like its nuclear missile origins and is powered by Russian engines (although the US is now introducing a ban on using foreign-made engines).

Hugh states that American space development was stifled by the huge expense of the Shuttle era, however SpaceX (founded by Elon Musk) is now changing things with their reusable stage 1 rockets halving the launch price, and their recent delivery of astronauts to the International Space Station. As the competitor to SpaceX, Boeing is behind schedule, and yet to succeed. Blue Origin (founded by Jeff Bezos) is less publicity-hungry than SpaceX, but is on the point of going commercial with reusable rockets which it names after the original astronauts: their “New Glenn” is similar in size to the Saturn rocket.

Meanwhile New Zealand's Rocket Labs has come out of left field with their small high-tech Electron rocket having a 150-200kg launch capacity (or a 25kg satellite to the moon). All parts of the launch system de-orbit, making it environmentally friendly: the stage 1 booster is to be plucked out of the air using a helicopter whilst descending under a parachute!

Hugh says to expect a shake-out of launch services as the launch vehicles need to be reusable: hence Russia's new Angara rocket, first flown in 2004 but still under development, may be obsolete by the time it is operational!

The presentation concluded with a brief introduction to engine types and orbits, including the more unusual Molniya, Tundra, and Lissajous orbits. However perhaps the most unexpected aspect was the revelation of Hugh's own contribution to US plans to return to the moon with his design for a zero-g space toilet which he is submitting to a currently running NASA design competition.
Report by Andrew Heald
Back to News