With almost 70 people in attendance, the Combined mid-week meeting was held to suit the speaker Erika Pearson.She had spoken at the annual luncheon of the NAC Staff held at Classic Flyers the same day. Graham Lister who was the convenor of the luncheon and Branch committee member introduced Erika and outlined her background with a double degree in aviation and aerospace engineering. We learned later she is the third family member to choose a career with Boeing and specifically retained her maiden name to continue the family connection with the company where she started as an aeronautical engineer. She is currently employed in Asia-Pacific Sales and has responsibly for a number of individual airlines in the region, including Air New Zealand.

Little did we know at the time of the meeting that Erika and her boss Christy Reese (VP Asia-Pacific Sales) would be present at Air NZ headquarters the following Monday to sign one of the largest NZ contracts signed with Boeing and General Electric for the purchase of eight 787-10 airliners, with options for another 20. 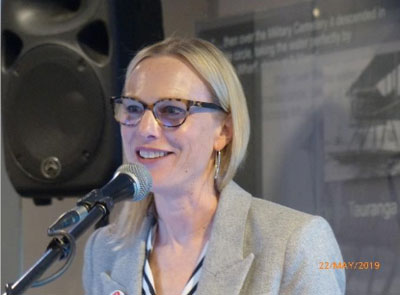 In opening her address, Erika noted while her lunchtime address had focused on the 50th anniversary of 737s being introduced to service by NZ NAC, she would also cover the 100th anniversary of first aircraft and first export contract of two Boeing Seaplanes to the NZ Flying School operated by the Walsh Brothers in Auckland in 1919. It is 100 years since an aviation milestone when George Bolt flew the first airmail service from Auckland to Dargeville by Boeing seaplane‘F’on 16 December1919.For those of us from Tauranga will know of a well-known photograph in the Boeing Room at Classic Flyers showing the same Boeing seaplane on the foreshore with the rail bridge under construction in 1920having delivered the ‘flying bishop’,Dr Henry Cleary, from Auckland to Tauranga and other stops in the Bay of Plenty.

She went on to describe the various divisions of the Boeing Company and its current range of commercial and military aircraft types and subsidiaries, including Boeing Australia.

The ‘Baby Boeing’, as the 737 was dubbed within the company,was certainly interesting, as it was developed after its competitors in the smaller single aisle category. Erika spoke about the competition between theDC-9 and BAC1-11,both of which were already flying. NAC set a challenge to Douglas and BAC with stringent operating requirements to make a right turn after take-off on one engine and safely clear the hills by the airport at Rongotai. A 1-11was sent to NZ to demonstrate but failed but sadly disqualified itself after failing to demonstrate it could meet the requirement.

She went on to explain that despite strong political pressure from the UK, the NZ government backed the NAC Board to buy the 737-200and‘Going Boeing’ was a major win for both companies. Erika noted as the -200 hadn’t flown when the order was placed, the associated Sales Order included an unusual clause:‘...operated to the satisfaction of the Chief Pilot of NAC’. Obviously, it met the requirements and proved the choice was the right one, as the 737 type provided a long and creditable service with the airline until it was withdrawn in 2015 over the intervening 47 years.

Erika had included into her address the names, dates and other crew of the delivery flights from Boeing. Following the conclusion of the address, the Chairman moved a vote of thanks before inviting questions on the address which she answered readily.

In follow-on comments, Peter Layne mentioned his scenic flight around Auckland after being aboard are cord breaking 737 flight time from Wellington. Paul Bowe, Taupo spoke warmly of the 737 and made mention of ZK-NQCthe737-200QC (or Quick Change) variant with palletised seating which had the highest utilisation of the fleet. In the combi role, it flew passengers during the day and after seat removal flew freight at night. Also,interesting,Bill Smillie, who flew with CAD Cal Flight,commented the first three NAC 737-200s were nicknamed Sooty, Smokey and Smudge as the early Pratt and Whitney JT8Denginesemittedsmoke plumes which could be seen from his office in central Wellington. Erika’s visit to Tauranga was concluded with dinner at the Tauranga Club. It was during the dinner, we discovered she is married with two children and was a regular visitor to NZ with her close association with Air NZ. Special thanks to Graham Lister for arranging the visit.

Prepared by Des Underwood with photos by Mike Feisst