The History of the NZ Aerospace FU-24

When: 2019-06-07
Speaker: Wally Gee assisted by Derek Williams.
Subject: The History of the NZ Aerospace FU-24

This well attended Branch meeting was held in the Armoury Room at Classic Flyers and attracted almost 40 members and guests. As part of his usual introduction, the Chairman held an aircraft quiz of three ag aircraft types in use in NZ before he introduced the speaker Wally Gee. He noted Wally as a Branch committee member, a volunteer on the restoration team at Classic Flyers with a CPL.

Bryan Cox was acknowledged as one of Wally’s flying instructors who was present at the meeting. Derek Williams was also introduced as a very experienced Fletcher pilot who had retired from Super Air in 2014 after accumulating more than 32,000 hours.

Peter McColl and Barry Simmons were introduced as long serving Fletcher pilots. Before reviewing the history of the Fletcher, Wally traced the origin of aerial topdressing in NZ. He explained it was primarily to manage soil erosion where extensive slips on hill country farms led to silting of rivers and loss of productive farm land. Wally thought the ‘father of aerial top dressing in NZ’ was Alan Pritchard who was a pilot with Public Works Department.

On becoming aware of the serious situation with soil erosion, he became involved with trials to sow seed from the air and thought fertiliser could be dispensed the same way. His initial trials came to the attention of the Soil Erosion and River Control Authority which funded larger scale trials. 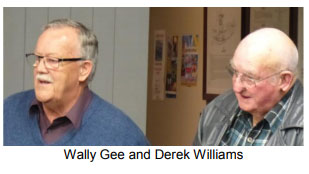 Wally showed an excellent historic film showing the effects of the soil erosion and topdressing trails conducted by RNZAF Avenger bombers. A large removable hopper with a fore and aft hopper gate mechanism. The film showed it was filled with fertilizer from bags into cut outs in the top of the hopper and raised into the bomb bay like munitions. The trails also included the use of an RNZAF Bristol Freighter which was modified with large triple hopper set-up which could be rolled into the hold much like the ‘cargon’ system used by SAFE Air Ltd. These trails proved the practicality and the economics of the scheme which launched the aerial topdressing industry in NZ. Not only was it successful in stabilising the hill country but it had the added benefit of allowing increased stocking rates on these farms.

Wally then reviewed the history of the Fletcher from its founding in the USA before being brought to NZ for assembly by Air Parts Ltd which later became part of Aero Engine Services Ltd (AESL) and eventually Pacific Aerospace Corporation Ltd. He covered the many variants and engine types which have been used to power the 297 of the type built from 1954 until the final batch of five for Syria in 1992.

Wally had arranged for the blinds in the Armoury Room to be raised to reveal the floodlit Fletcher ZK-BDS which is displayed in Hangar 1 at Classic Flyers.

From the original 250hp piston engines, a succession of more powerful aero engines had been used before attempts were made to repower the Fletcher with a Chev V8 automotive engine as well as various turbo-props with the latest a diesel version now under development. By coincidence, one of the other video’s Wally showed was of a Fletcher take-off from a strip near Tokoroa happened to have been flown by Derek Williams. Derek followed with a pilot’s perspective noting some of incremental increases in power ratings for the same 3/4ton capacity of the early Fletchers, before increased capacity became possible with subsequent variants and derivative types. 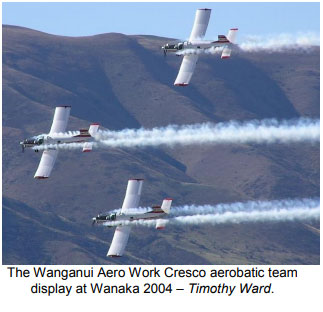 Wally explained the Cresco had been developed from the Fletcher and merited its own address. The latest derivative is the Chinese AT200 unmanned cargo drone, derived from the PA XL750 which is being developed in China in a joint venture with Pacific Aerospace.

He concluded his address with a video sequence of the three Cresco aerobatic team flown by Wanganui Aero Work (WAW). The display sequence with smoke from both exhaust pipes was impressive.

The Chairman thanked Wally for the first-class review of the origin of the topdressing industry and ahead of the history of the Fu-24 Fletcher, as well as Derek Williams for his input. The meeting concluded with the usual light supper and a lot of talk about the much-respected Fletcher FU-24. Wally is due to repeat his address to the Waikato Branch in August.

Prepared by Des Underwood, MRAeS with photos by Mike Feisst unless noted otherwise.