Our final meeting for the year was a two-speaker presentation titled:‘The KAHU Jet’. As this meeting was held in the Boeing Room, at Classic Flyers, Skyhawk NZ6201 had been appropriately positioned adjacent to the balcony where you could almost touch it. By coincidence, the opening slide included a photo of NZ6201 at in its original 75 Sqn livery.

Wally Gee chaired the well attended meeting, with nearing 30 present. In his intro, heposed questions on the origins of the Douglas Dauntless and the Douglas A4B Skyhawk, designed by the same Douglas military aircraft designer, Ed Heinemann.

Former RNZAF Engineer, Des Underwood led off his presentation with the scope and timeline of Project KAHU update. He explained the systems integration was completed bythe RNZAF Project team working with Smiths Industries in the USA. The RNZAF took on the role of prototype developer at Woodbourne working with a contractor team to complete the necessary design work, make the new parts and wiring harneses at No 1 Repair Depot.The prototype conversions NZ6254 and NZ6205 were completed in 1988, to validate the design and turn them into the first KAHU Jets. Des explained his initial role with KAUH involve dover seeing the Skyhawk wing refurbishment which was undertaken by the by 1 RD at Woodbourne a mix of RNZAF and contractor working party from SAFE Air. This was an important project prerequisite to deliver KAHU Jets with zero-life wings after an extensive rework to replace all three wing spars, the lower skinand reinstate the integral wing fuel tank. 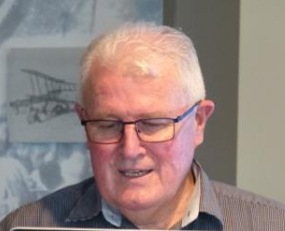 On promotion to Squadron Leader, Des was appointed OC Airframe Reconditioning Squadron and became responsible for the prototype KAHU conversions of TA4K NZ6254 and A4K NZ6205. The prototype design and installation allowed the new hardware and wiring harnesses to be drawn up to allow manufacture by Pacific Aerospace Corporation in Hamilton from approved RNZAF drawings. Other photographs showed the external changes of the KAHU Jet andthe cockpit. Des described the challenge to develop a new instrument panel strong enough to support the hefty Ferranti Head Up Display. He said, it was made of machined parts.

The 5min video A-4K Skyhawk: Project Kahu Begins (1987)” –Today Tonight Show included a much younger Des who was interviewed for his role in the Project. A comment after the address, noted his voice sounded the same, to which he responded:“I suppose it would!”


Des reviewed the production process completed by SAFE Air at Woodbourne supported by 1 RD which was responsible for induction, and installation of engines and other systems un-affected by the upgrade ready for acceptance test flights.The timeline showed the 20 strong fleet of T/A-4K Skyhawks was completed in three years. Desconcluded his address by noting that 30years on, of theeight acquired byDraken International in 2012, seven KAHU Jets remain in service in the USA.

John Mathewson was introduced by Des, as an RNZAF contemporary whom he first met at Ohakea in 1978 when JC was an A4K Skyhawk pilot on 75 Squadron. He later became OC 2 Squadron RNZAF beforemovingto Air NZ where is currently a 777 Captain. Together with Craig Mossman, JC flies the L-39 Albatros with Fighter JetsNZ to give others the opportunity to fly a fighter jet in Tauranga. JCspoke from a list of bullet points, starting by tracing the impact of the transition from 20mm cannons, rockets and gravity munitions of the original T/A4K to the KAHU Jet with digital nav-attack system integrated with an interfaced guided missile, laser guided munitions and Electronic Counter Measures (ECM) detector with chaff and flares. The 20mmcannonswere retained and enhanced with the gunsight part of the HUD. One major change was the mission planning computer providing the means to upload mission data via a hand-held data transfer module. He also said video camera and footage from different aircraft involved the same air combat sequence could be used to provide different perspectives of the action which was useful providing an operational record,as well as for training. 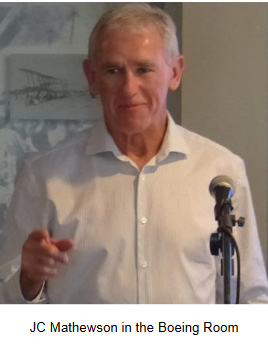 JC said he had been assigned astest pilot supporting the production phase as aircraft exited the upgrade. He had another role to verify the accuracy of the nav-attack systemtofeedback results to allow the software to be refined. He then spoke about his role as OC2 Squadron which had been assigned the role as KAHU OCU as well as new strike pilot induction and training.

He mentioned the need to revise operating tactics for the ‘new’ digital jet in conjunction with Group Captain Ian Gore. He spoke about the tactics adopted for the KAHU Jet to use its new suite of ECM to provide threat warning for missile or radar warning and when to use chaff and flares to foilan adversary. He then used the white board to describe how a typical four-shipmock anti-shipping attack was planned from four different directions to provide the RAN with air defence training for its surface fleet.

JC went on to tell the story of a KAHU Jet tangled and successfully evaded a supersonic RAF F.1 Tornado ADV interceptor during an air defence exercise in Malaysia which he commented to the RAF Deployment Commander that: “the A4 had been flown by the most junior pilot on the Squadron.”After his interesting outline, he introduced a 15min video titled “Douglas” which featured significant air to air sequences as well as video camera recorded ‘through the HUD’. Following the video everyone was left in no doubt just how effective the update had been. JC explained the combination of a modern Nav-attack system with ECM, guided weapons and the aircrafts small size had transformed the KAHU Jet into a valuable asset of the RNZAF Air Combat Force. After the address, a number of questions were answered before Wally Gee moved a vote of thanks meeting. A good number stayed on for a chat over a glass of bubbly or a cuppa and Christmas nibbles as an apt finale to the Branch’s activities for 2019.

The following report appeared in the Hamilton Branch December newsletter:
Bay of Plenty, 6 Dec meeting: Warwick and Gina attended the BOP meeting at Tauranga last Friday where John Mathewson (JC) former pilot and Des Underwood, former Engineer, gave us a very good presentation on the A-4 Skyhawk -Project Kahu, which was well received by all those present. Project Kahu was another major milestone in NZ which brought work, respect and prestige to both the civil aviation and defence industries.