In response to a suggestion by George Phillips, the Airfield Day to Thames was arranged to allow Branch members to attend the unveiling of the bronze statue of Sir Keith Park at the Civic Centre at 11am.

After a pre-departure coffee at Classic Flyers, Ken Brooking took one car load with him while others took the opportunity to make it a fly-in to Thames airfield. Jack Best took Des Underwood in his Tecnam P96 Golf ZK-TEK while Jim Evans flew in from Whitianga in his RV–12 ZK-LSV.

It was a fine day and great for flying, with TEK tracking up the harbour from Tauranga to Bowentown, through the Waihi Gap to Paeroa and then north to Thames. A taxi got TEKs crew to the Civic Centre to catchup with the others with 5 minutes to spare. 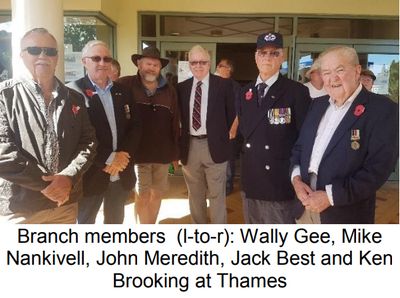 At the well-attended event, members of the public joined members of the Park family along with local and national dignitaries and invited guests to witness the unveiling of the bronze of Sir Keith Park. The event was accompanied by a fly-past by the Roaring Forties (complete with smoke), the Yak display team we had seen at Thames airfield. In all, 13 aircraft took part in the fly-past.

The noise of the flypasts served to stop the Hon Ron Mark MP and Minister of Defence in his tracks as he reviewed the life of Sir Keith. While unfit for further service with the Army, Park was allowed to learn to fly and joined the Royal Flying Corps (later Royal Air Force) and began the illustrious career that followed, including his famed leadership of 11 Group, Fighter Command during the Battle of Britain. Representing the RNZAF, was the newly appointed Deputy Chief of Air Force, Air Commodore Carol Abraham who had been the guest speaker at the ANZAC Day Civic Service at Memorial Park in Tauranga.

After the formalities were over and quick catchup with others who had attended the event, the Airfield Day moved on to the Tastebud café opposite the Thames airfield.

Over a welcome lunch, sharing the odd flying/aviation story continued until we were the only ones left in the place and it was time to return to Tauranga.

Jack and Des walked back to the airfield before pre-flighting and flying back to Tauranga, arriving as Ken and the others pulled into the carpark at Classic Flyers. So concluded a very successful Airfield Day to Thames.

Prepared by Des Underwood, MRAeS who also contributed the photos.