Our speaker was Colin Alexander who is a pilot, flying instructor and LAME from Tauranga who operates the local aircraft maintenance business Solo Wings Ltd. 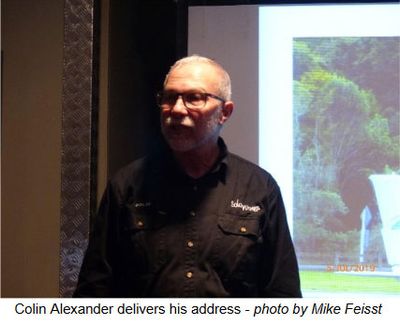 Opening his address, titled: ‘Tecnam in NZ’, Colin described himself as a passionate aviator who is an authorised instructor,testing officer and technical officer for the Recreational Aircraft Association of NZ (RAANZ) who said he flew anything including: weight shift, three axis microlights, gyrocopters, helicopters as well as seaplanes.

He went on to describe the difference between microlight and Light Sport Aircraft(LSA) types which were a feature of the Tecnam line up since it was founded.

In backgrounding, Tecnam, he noted the company was founded in Naples in 1948and had been innovators of single and twin-engineair craft types ever since. Colin said he had visited the factory a number if times and had been impressed by the industry leading LSA designs.He said, at least one new Tecnam aircraft rolls off the production line each working day and Tecnam has more Light Sport eligible aircraft flying worldwide than any other manufacturer.

One of the keys to its success had been to use of Rotax engines which Wikipedian oted: In the light aircraft class, in 1998 Rotax outsold all other aero engine manufacturers combined.

He also mentioned the latest development was the eleven-seat twin-engine P2012 Traveller with its2 plus 9 seat layout and powered by hi-tech Lycoming TEO-540-C1Avariantrated piston engines at 375 HP.

Colin spoke of his personal association with the Tecnamtypein NZ and showed photos of some of the aircraft he had sold to local customers in 2001, including P96 Golf 100 ZK-WNGand TEK. It is no coincidence, Branch committee member,Jack Best,is part of the local syndicate which owns and operates TEK.

Colin also mentioned he had two new Tecnam2008C MkIIs which had arrived from Italy for assembly by Solo Wings and destined for a new flying school in Oamaru. The new variant introduced a carbon-fiber fuselage and integrated fin. He invited Branch members to visit the Solo Wings hangar to see these new types being assembled which had had NZ markings applied at the factory.

Concluding with Tecnam supporting video, Branch members were treated to an enlightening insight into this well-established brand of LSA types in NZ. Thanks Colin for an excellent presentation.