Bay of Plenty Branch Meeting. '‘A Drone view from across the ‘ditch’ 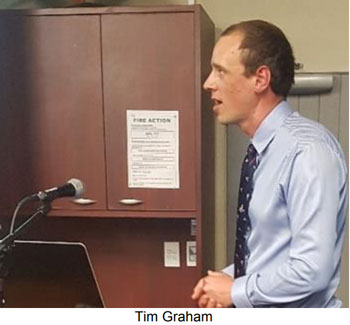 The April meeting was held in the Armoury at Classic Flyers. The speaker was Timothy Graham who is an Associate of the Australian Division, RAeS with the Canberra Branch. His presentation was titled: A Drone view from across the ‘ditch’. Tim told us he grew up in Tauranga before enrolling in the School of Aviation at Massey where he graduated as a Bachelor of Aviation Management and Masters of Aviation. He has been employed by CASA for eight years and in the RPAS (Remotely Piloted Aerial Systems) division for more than five.

In comparison to RPAS, Tim noted Australia has 802 organisations with Aircraft Operators Certificates (AOC) to allow them to operate aircraft for profit. Thus, for CASA, RPAS community is already a large sector as more and more uses are being found for these vehicles and the purchase and operating costs
remain relatively modest.

Tim detailed the size of RPAS community in Australia and the adopted acronyms:
Among many other points covered, Tim outlined two interesting RPAS projects which demonstrate how these vehicles can be used where the lack other infrastructure can be overcome.

In Vanuatu, an RPAS solution is being successfully used to deliver vaccines to remote islands, using a series of relay stations where battery packs are replaced to allow these UAVs to deliver their life saving packages of medicines to pre-arranged landing points. After landing and the vaccines unloaded, the RPAS units are flown back to the operating base, all under the control of remote operator/pilots.

In contrast to another area of use for RPAS vehicles, Tim outlined the Airbus Zephyr which is a high flying solar and battery powered lightweight aircraft which is being trialled by Airbus in the High Altitude Pseudo-Satellite (HAPS) observation and communications relay roles.

From Wikipedia, a succession of Zephyr variants include: Zephyr 7 is larger at 53 kg and capable of a maximum altitude between 65,000 and 70,000 feet, it required five ground crew to launch, as opposed to three previously for the Zephyr 6. Zephyr 8 is now under development and will be bigger still, with a 28-metre wingspan.

The Chairman thanked Tim for a very good presentation which covered the size and scope of this important new field of aviation. He noted that we had this from the Australian regulatory perspective and we will need to review the rules for RPAS operations in New Zealand. Tim went on to repeat his presentation the following week for the Hamilton Branch.