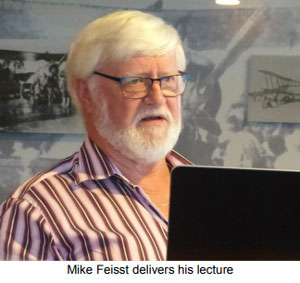 Mike Feisst was our speaker for the last Branch meeting of the year and his topic: ‘Visit to the HARS Aviation Museum’.

In June, Mike and his wife Lois visited the Historical Aircraft Restoration Society (HARS) Air Museum at Illawarra, NSW and he came back with a good number of photos of the large aircraft collection which he used as the basis for his lecture. The lecture traced the guided tour he had taken at the site when he emphasised the majority of aircraft he spoke about were flyers.

To support his slides, Mike spoke from his 12 pages of notes about the history of each of the HARS aircraft exhibits. The detail he included provided the background to each exhibit most of us miss on visiting museums. It was like being on the tour with an audio guide.

Mike’s virtual tour started with the former Qantas B747-438 Longreach VH-OJA ‘City of Canberra’. He had his picture taken standing inside the engine intake, as well as other shots of the cockpit and inside the massive main landing gear bays. With a guide and a safety vest, they were free take a very close look.

HARS has a trio of Lockheed maritime patrol aircraft that will all be fliers. Two P2V-7 Neptunes are flyers, including: ex-RAAF A89- 273 (VH-IOY) and ex French Marine Escadrille 147566 (VH-LRR). There are only two others flying elsewhere. Ex RAAF P3-C Orion A9-753 is to due fly as VH-ORI. Mike told us the RAAF was helping HARS to keep the Orion flying. His pictures of the Orion interior showed it was as if the RAAF crew had just walked off it.

Mike explained HARS had been able to acquire the services of a number of aircraft maintenance with ratings for their aircraft.

Mike also told us the story of the restoration of another classic aircraft type from Lockheed which is a testament to the resolve of HARS and its restoration teams. The HARS Super Constellation was originally delivered to the USAF in 1955 as C-121C serial number 54- 0157, c/n 4176. #4176 was found in the boneyard at Davis Monthan Air Force Base at Tucson, Arizona in a very sad state. and had been used to supply parts for other aircraft and the gaps left had been not very well covered.

As well as considerable support from Qantas to get teams and equipment to and from Tucson, the statistics Mike recounted of the restoration effort was remarkable, involving:
The before and after photos tell the amazing story of virtual scrap being to fully restored and flying. It shows what is possible with the right skills and the determination to make it happen.

The HARS Connie was painted in former Qantas livery of white and grey (instead of polished ally on the lower fuselage). The word “Connie” is emblazoned on both sides of the fuselage above the distinctive red window stripe which is also on the tip tanks. The triple tail fins are a characteristic feature of the type.

At the end of the lecture, a video was run featuring the start-up and take-off of the HARS Connie from Illawarra on its way to the airshow at Avalon 2015.
It was impressive!

A vote of thanks was proposed to acknowledge Mike’s first class guided tour of the HARS aviation museum. The meeting concluded with a very convivial supper of champagne and Christmas nibbles.